Stop the Smoke and Mirrors!

Are healthcare-associated infections (HAI) and the substantial economic burden they cause inevitable? Far from it! Many such infections are preventable through better hand hygiene and proper disinfection of high-touch surfaces alone. While poor compliance with hand hygiene remains a perennial problem, my focus here is on problems with disinfection of frequently-touched, hard, non-porous environmental surfaces.

Most disinfectants are marketed for infection control in healthcare settings. Unfortunately though, many such products are either ineffective for the purpose and/or often used improperly. Why?

(1) Government registration: While materials managers and infection preventionists purchase/use only government-registered products, the registration process for environmental surface disinfectants in particular is often based on flawed methods for microbicidal activity. Therefore, the registration number in itself is of limited value.

(2) Contact time: Product labels often require surfaces to remain wet for a minimum of 10 minutes, and many such products may fail with much shorter contact times common under their field use. The argument that such products continue to work though the treated surface may look dry is specious. Even if correct, does this not mean that a high-touch surface still cannot be contacted during that minimum period of 10 minutes? Is that a realistic scenario in a busy healthcare setting?

(3) Soil load: In general, product labels recommend surface precleaning, but without giving lucid directions for it. Precleaning, if indeed carried out, is often quite cursory, possibly leaving a certain level of disinfectant demand on the surface. In case the precleaning is really thorough, that surface may not require any subsequent disinfection! Therefore, testing without any added soil load quite likely over-estimates the microbicidal potential of a given product.

(4) Spectrum of microbicidal activity: Frequently, the testing is against selected Gram-positive and Gram-negative bacteria only, but the label claims ‘broad-spectrum’ activity. The use of this antibiotic-relevant term is totally inappropriate for disinfectants. The correct use of this term must mean a given disinfectant’s ability to inactivate not only vegetative bacteria but viruses and fungi as well, which are common nosocomial pathogens.

(5) Inappropriate surrogates and test organisms: In my view, the disconcertingly common practice of allowing long lists of organisms on product labels has no justification in science. Many listed organisms are relatively fragile outside hosts and thus not known to spread through environmental means. Therefore, the listing of such pathogens clearly contributes to the ‘fear-factor’.

(6) Testing without wiping action: Even though most surfaces are disinfected with wiping, testing and label claims of products used for the purpose rarely entail any wiping action. This is a serious omission. Wiping deposits only miniscule amounts of disinfectant on the target surface with the deposited liquid evaporating almost instantaneously. On the other hand, the mechanical action of wiping can contribute significantly to surface decontamination with a suitable disinfectant.

(7) House-keepers: In spite all the talk about in-service training and routine monitoring of house-keepers, they remain a weak-link in the infection control chain. Such individuals are often the least skilled and educated with limited proficiency in the working knowledge. In addition, poor pay, job insecurity and lack of any tangible recognition of the crucial role they play contribute further to the high rate of staff turn-over. The literature is replete with examples of how a perfectly good disinfectant has been improperly diluted, stored and applied by house-keeping staff. This is akin to having ill-trained and ill-equipped front-line soldiers in a major battle.

This may sound heretical, but I believe that a combination of the above-listed factors may well be inadvertently spreading HAI instead of preventing them by the routine decontamination of environmental surfaces. Obviously, this situation must change soon if we are to successfully combat HAI. Here is what I propose:

a. Actively discourage testing and label claims against the ‘bug-of-the-month’; this current practice is not science-based.

d. Harmonize at the global level, testing and registration of hard surface disinfectants to encourage investment in R&D.

e. Improve the training and monitoring of house-keeping staff and better recognize their crucial role in infection control. Without this, all else may be futile.


I’ve given my opinion. I’m curious to know what you think?
Dr. Syed Sattar 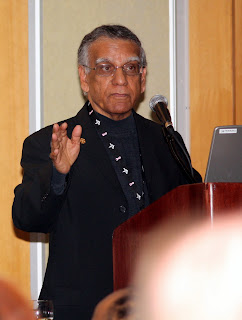 SYED A. SATTAR, Ph.D.
Dr. Sattar is the founding Director of the Centre for Research on Environmental Microbiology (CREM), and emeritus professor of microbiology at the University of Ottawa. For over 45 years, he has been studying the fate and environmental spread of infectious agents via water, food, air, hands, environmental surfaces and municipal wastes. A major focus of his current work is to promote the use of safer and more effective chemical and physical agents in environmental control of pathogens.

He has authored several books, monographs and lab manuals, and published >300 research papers, book chapters commissioned reviews and technical reports. He has also delivered over 300 invited lectures worldwide, and presented some 180 papers at national and international scientific meetings. In 2009, Dr. Sattar became the first non-European scientist to receive the Hygieia Medal of The Rudolf Schulke Foundation in its 33-year history.

He is a Registered Microbiologist of the Canadian College of Microbiologists, and a Fellow of the American Academy of Microbiology and a member of the editorial boards of the American Journal of Infection Control and International Journal of Infection Control. He advises the Canadian and U.S. governments on disinfectant test methodologies. Microbicide test methods developed by him now form the basis for several national and international standards.