The Plague is not just for the Middle Ages.... 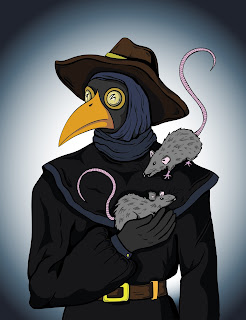 You have to love when a plan comes together or when a new story ties perfectly into a previous blog and gives you the perfect jumping off point!  That’s the case for this week’s blog.  If you recall a few weeks ago I wrote a blog about “Where the next hotspot for zoonotic diseases would be” where according to a model developed by researchers, Kansas and Nebraska were highly likely to be added to the likes of China, Kazakhstan and parts of the Middle East as zoonotic hotspots.  It appears the model may have been a little bit off and Colorado should have been included among the upcoming hotspots.

Why you ask?  Well according to the Pueblo City-County Health Department a second person in Colorado has died of the plague this year.  Plague, which killed roughly a third of the population of Europe at the end of the Middle Ages, causes fever, chills, and swollen and painful lymph nodes as it spreads throughout the body. While normally treated by antibiotics, the disease can become deadly if untreated.  According to health officials, the victim may have contracted the disease, caused by the bacterium, Yersinia pestis, after being bitten by fleas on a dead rodent or other animal.

The bacterium that causes the plague maintains its existence in a cycle involving rodents (e.g. rock squirrels, wood rats, ground squirrels, prairie dogs, chipmunks, mice, voles, and rabbits) and their fleas. But rodents are not the only animal to be implicated with the plague.  Cats are particularly susceptible to Y. pestis, and can be infected by eating infected rodents.  In fact there have been several documented cases of human plague that have occurred in the United States in recent decades as a result of contact with infected cats.   While there are generally a few cases each year in North America, the last outbreak of the plague occurred in Los Angeles in 1924-1925 and was attributed to rats and not cats.

There are actually three (3) types of plague:


As with other zoonotic diseases, vigilance and prevention is a cornerstone as close proximity between humans and animals will continue lead to disease transmission.  Speaking of which....I’d best go find my cat.  He’s outside chasing mice and rabbits and likely picking up fleas......