When you try something new, there’s no hiding that you’re usually very bad at it.  For many, the easiest way to eliminate that feeling of angst is to quit practicing and go do something else, so that’s what most of us do.  Take me for example, I love music.  In fact, going into school, my choice was science or music.  I knew I didn’t want to be a teacher so I chose science, but continued to take music as a minor and while I stopped playing the flute and sax, continued with piano whenever I could get my fingers on the ivory and singing.  Over the last 10 years, life has gotten in the way and these days aside from singing in the car, I’m not very musical.  I decided that perhaps I would take up a new instrument, guitar, because I have lots of family and friends that play, I would be able to sing and play and unlike a piano, and I can take a guitar virtually anywhere I want to.

I did not however, consider the angst I would feel for not being good at an instrument as soon as I picked it up.  Nor did I consider the fact that when I play piano or sing, even from memory, I visualize the notes I am playing or singing.  When I pick up the guitar, I can’t visualize the chords (yet) and that has been paralyzing….and more than just a bit humbling.  I know that practice makes perfect and I have resolved to start taking lessons, get out of my head and just try.

What does this have to do with infection control or the use of disinfectants?  Well, as I’ve talked about in past blogs, perfecting cleaning and disinfection practices can save lives.  More importantly however, practicing the safe use of disinfectants will save lives.  Did you know that more than 30 million workers are exposed to hazardous chemicals in their workplace?  In North America, because of the safety concerns we have programs like OSHA in place to protect workers.  Most of us would immediately think of the SDS as a need to ensure that information on the product is readily available.  While the SDS provides valuable information, many overlook the importance of Work Place labels.

Back in 2015, I wrote a blog “Mommy, this water tastes funny” where a son of a friend of mine drank bleach.  It had been decanted into a water bottle by cleaners while they were on vacation and left on the bathroom counter.  The bottle looked exactly like the bottles of water he had been drinking from for the last several days.  I also know of a story of a healthcare facility where spent hydraulic fluid had been put in an empty Enzymatic Instrument Cleaner bottle and put under the sink…the sink where instruments were reprocessed.  No one realized what was going on until surgeons started complaining of the fact that instruments were slippery to touch.  Just last week, one of my teammates took a call from a veterinary clinic who had taken a bottle of diluted disinfectant and used it in their dental water lines, mistaking it for a bottle of distilled water.  They performed several procedures with pets and were concerned of the side effects for potential ingestion of the disinfectant.

Luckily in all cases, no one died and no one was seriously injured, but none of these stories had to happen if we were practicing safe chemical use.  Safe chemical use is not just about reading the SDS or wearing the correct PPE.  Most importantly, safe chemical use means that the bottles the chemicals are stored in are correctly and adequately labelled so that it’s not just you that knows what the bottle contains.  While the following is verbatim from “Mommy, this water tastes funny”, I feel based on this week’s call it is worthy of repeating what a workplace label must include and you can see, it’s not so much that it’s a daunting task:

1. Product identifier (product name)
2. Information for the safe handling of the product
3. Statement that the SDS is available
4. May contain the WHMIS/GHS hazard symbols or other pictograms. 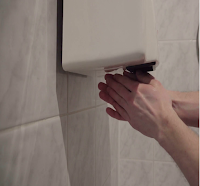 As I’ve mentioned in previous blogs, I like to get my geek on.  Thankfully I was alone in my office when I squealed in delight after reading a Letter to the Editor in the October Special Edition of the Journal of Hospital Infection.  The letter talked about a pilot study comparing the level of microbial contamination found in hospital washrooms when paper towel or hand dryers were used.

I HATE hand dryers.  While I try darn hard to be environmentally conscious and sit on our company’s Green Team, when it comes to drying my hands I have no qualms about the number of trees needed to be cut down to make paper towels.  Why? Because there is enough evidence to show that hand dryers impede hand hygiene and as this study shows when looking at microbial contamination washrooms (restrooms) with hand dryers had higher levels of microbial contamination than washrooms that used paper towel.

Some may be questioning my comment about hand dryers impeding hand hygiene, but back in 2012 guest author Prof. Todd from Michigan State University discussed a survey where researchers found that hand dryers, because they can only accommodate a person at a time and can take up to >1 minute to adequately dry hands, can lead to avoidance of their use, incomplete drying of the hands or worse, wiping clean hands on clothes…..  I will admit there has been more than one occasion where along my travels I have encountered either a line up to get to a hand dryer or gave up on getting my hands dried due to insufficient air flow and/or heat.

In this particular study, the researchers sampled 2 washrooms within one hospital over a period of 3 months.  Their sampling regime included air sampling, environmental sampling of 5 locations and collecting dust samples.  In reviewing the data, significant differences and trends were seen.  In the washroom that utilized paper towels lower microbial levels were found whereas in the washroom that employed the hand dryer the microbial contamination was higher, had a greater range of bacteria and in general the floor, the hand dryer and the dust samples were more heavily contaminated.

I knew there was a reason I had such a loathing for hand dryers….this study simply continues to build upon my bias towards the need to ban their use.  The fact that WHO advocates to dry hands thoroughly on a single use towel strengthens my resolve to avoid the use of hand dryers at all costs!

PS – I know more investigation is needed, but for me the proof is in the
pudding - blowers are bad!
Posted by Unknown at 8:31 AM 0 comments 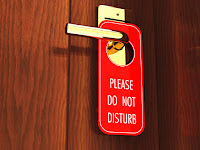 This week I’ve been off site at an amazing Executive Leadership Program.  It’s been insightful, a little humbling and very eye opening.  It has also been a bit sickening…..and by that I mean 5 of the 12 people in our group came down with tummy issues and as we found out last night talking to another group at our facility, 7 of the 30 in their group came down with something as well.

That something...was definitely food-borne, we just can’t decide if it was the Asian coleslaw, the cod or the avocado salad….or maybe all 3!  Needless to say, I have managed to survive enough to complete my course, but all good intentions in writing my blog this week went down the drain (pun intended).

The upside I suppose, is this is a great reminder that where ever we go, bugs will be there!

Nicole
Posted by Unknown at 9:09 AM 0 comments

Restrooms, You and the Flu! 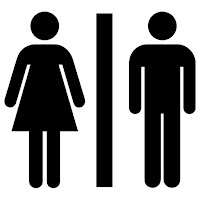 There are times that my self-control amazes me.  Perhaps not when it comes to chocolate, candy, chips and dip or really good cheese, but upon occasion, like my ability to not work out is truly impressive.  The fact that we have hit November and this is the first blog of the fall to talk about Flu Season is a great example of my self-control.

You may be wondering why I think I’m so impressed with myself, well…..have you be following the Flu Season in Australia and the Southern Hemisphere?  Australia has had a particularly bad flu season with >93,000 lab confirmed cases as of August 18th which happens to be 2.5 times more infections than the previous year.  The deaths and hospitalizations associated with the flu have also almost doubled when comparing recorded numbers year over year.

So what does that mean for North America? Well, if we use Australia and Hong Kong as indicators, and we know they have grappled with one of the worst flu seasons on record, then it’s safe to say that we may follow suit.  One of the reasons is because H3N2 is one of the most predominant strains circulating and it happens to be the strain that wreaked havoc a couple of years ago when our vaccine was a mismatch…  So, with the arrival of November we can and should expect the flu to start showing up.  If we keep on track to when we typically see spikes, we can expect the first  hit sometime in December, about the time that kids return home from school. Then a second hit in late January into February when we start seeing the true colour of Jack Frost and his blustery frigid temperatures.

Which leads me to restrooms and the flu.  “Spring Cleaning” is a well-known phenomenon with its intention to get rid of the dirt and grime that accumulates over the winter after we lock ourselves inside to avoid the cold.  Perhaps we should develop a new phenomenon – Fall Extermination.  We know that germs can be anywhere and we know that germs start “accumulating” in the fall when Cold and Flu seasons hits so maybe if we look at implementing a few key prevention tips we can help reduce the risk of transmission:


As we enter flu season, I hope you implement a few of these things both at work and at home because there’s nothing worse than working with sick grouchy people only to have to head home to a husband with a man-cold……