The Horror of Hand Dryers 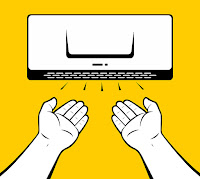 I just returned from the 2019 IPAC-Canada National conference. Since Friday I have been using public washrooms in hockey rinks, hotels, restaurants, conference centers and airports. It’s no secret that I’m not a fan of public bathrooms. They can be dirty. They can lack amenities (aka TP and soap) and whats even more disgusting, is that they may have only the option to use hand dryers. My dislike for hand dryers stems too much reading, but also observing what the area around hand dryers looks like. You can see the buildup of water splatter (aka biofilm) on the walls, if the bathroom has the air jet type you can see the pooling of water at the bottom, and if you’re really lucky the telltale reddish-pinkish hue of Serratia.

In 2012, guest blogger Prof. Todd wrote about hand washing and drying to reduce microbial contamination highlighting the fact that the friction generated during hand drying is even more important than that generated during washing. Why? Because the soaping stage loosens the microorganisms from the skin, while the physical friction from drying removes them. Since then, this concept has stuck with me, and ensured my preference was to dry my hands using some form of hand towel.

This week a friend send me a link to a study published in 2018 that I had not come across - Deposition of Bacteria and Bacterial Spores by Bathroom Hot-Air Hand Dryers. The researchers compared the bacterial contamination in the air of a bathroom, and found something that now makes me feel that I need to hold my breath in bathrooms with hand dryers. The study showed that petri dishes exposed to bathroom air for two minutes with the hand dryers off only grew one colony of bacteria (or none at all). Conversely, the petri dishes exposed to hot air from a bathroom hand dryer for 30 seconds grew up to 254 colonies of bacteria (most had 18 to 60 colonies).

If this is not bad enough, the researchers further studied how the bacteria came to be in the hand dryer. After placing a HEPA filter over the air intake and testing the hand dryers again, they found that the amount of bacteria grown in the petri dishes had fallen by 75%. The bacteria is not coming from the hand dryer itself but the air pulled through it and used to dry our hands. In another 2018 study, researchers found that every time a lidless toilet is flushed, it aerosolizes a fine mist of microbes and that this “fecal cloud” may disperse over an area as large as six square meters (65 square feet).

Does this mean that you’re better off not to dry your hands when a hand dryer is the only option? No. Drying actually helps minimize the chances of bacteria left on your hands after you’ve washed to survive. Truthfully, the chances of picking up a pathogenic bacteria is higher via direct contact with someone than a bathroom, but the findings are still gross and I still will try to avoid hand dryers whenever I can!

Nicole
Posted by Talk Clean to Me at 8:40 AM