Pigs have outbreaks too! 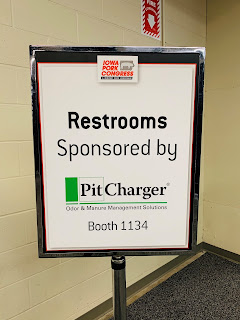 This week I was in Des Moines, Iowa attending the Iowa Pork Congress.  As you’ve likely guessed, the congress draws people interested in the swine industry from producers and contract feeders to consultants and students.  I am now certified in Transport Quality Assurance meaning I am now among many in the industry that understand the best practices for handling, moving and transporting pigs and the impacts that can occur on pig well-being, the quality of meat and what biosecurity considerations need to contemplated to avoid outbreaks.

As mentioned in the last several weeks, we have a potential for a global outbreak in the works with the 2019-nCoV outbreak in China and cases now found in the US.  At this point, all imported cases can be traced back to Wuhan, China.   While the world may be focused on this outbreak and becoming increasingly concerned for what it may mean to our health you may not be aware that for the swine industry and outbreak of African Swine Fever Virus (ASF).  In 2007 an outbreak occurred in Georgia and the virus has been spreading through the Caucasus region, the Russian Federation and Eastern Europe with cases being confirmed the wild boar population in Belgium.   In 2018, ASF hit China and has rapidly spread across the country which has the global community on high alert as containing the virus has been serious challenge in a country that owns almost half of the world’s domestic pigs.

From a Canadian perspective, because of China’s endemic status of Foot and Mouth Disease live pigs and even pork products are not allowed to be imported into Canada.  When in comes to ASF, on a global basis, the highest risk factor from China is the importation of feed, travellers coming into contact with the virus and bringing it back on their clothes and footwear, and people smuggling in infected pork and pork products.

The virus itself is an enveloped virus belonging to the Asfivirus family and includes at least 22 strains which has helped in tracing outbreaks to their source. It is extremely resistant to putrefaction and sunlight and can persist in refrigerated meat and carcasses for up to 6 months and for much longer when frozen.  This highlights the reason why smuggling pork into countries that do not yet have the virus is such a concern.  The virus is spread from pig to pig by aerosol from infected discharges and faeces by the bites of soft ticks, the bites of lice and flies and by direct inoculation from contaminated syringes. Infection can also be spread on contaminated implements and during transport.
The world is small.   You never know when a pathogen is going to board a passenger or cargo flight or arrive by sea on a ship in hold of feed destined for not just us, but the animals we eventually eat.
Bugging Off!
Nicole