I fly, You fly we all share bugs together! 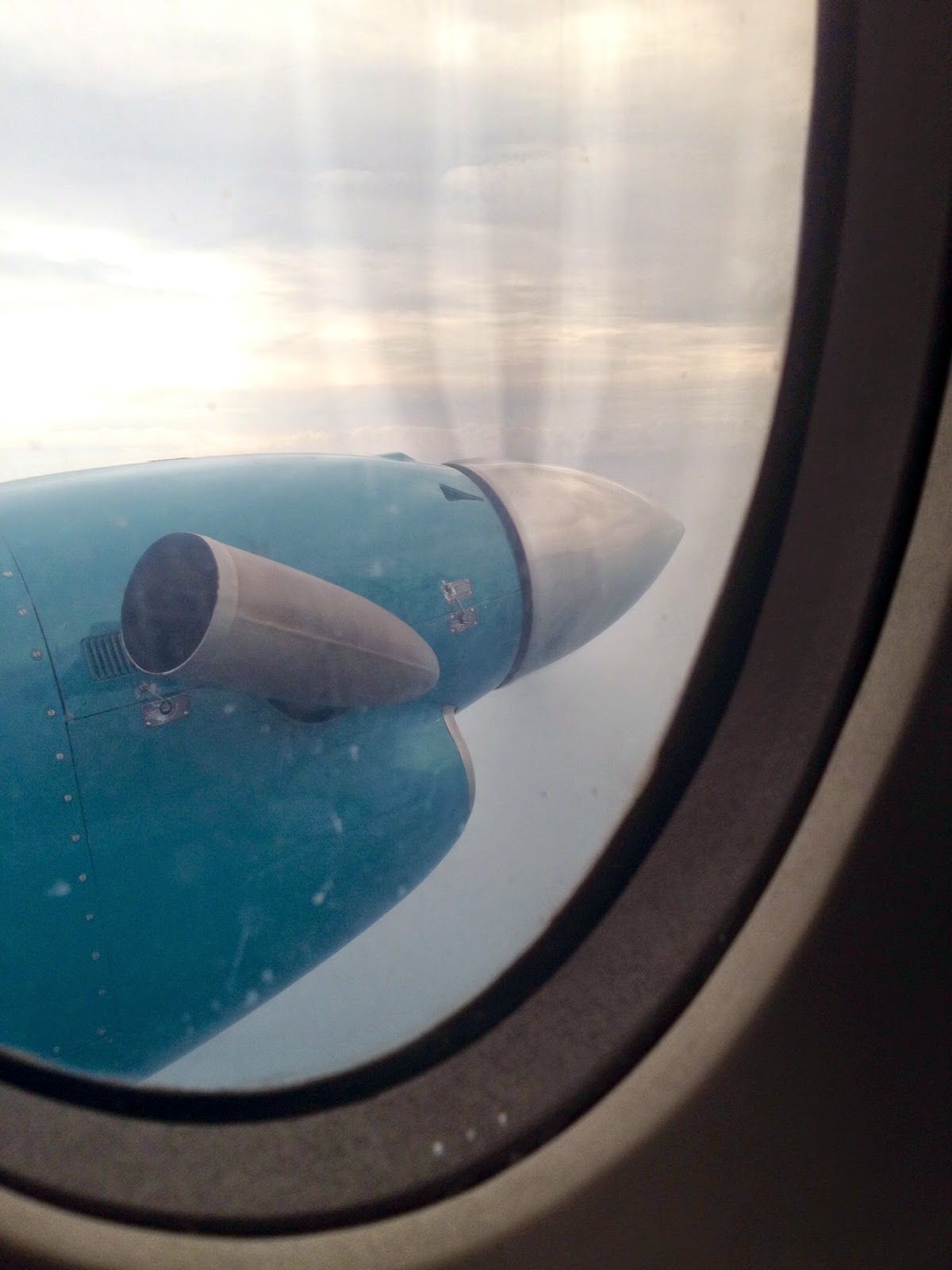 Inspiration can come from many sources when writing.  I had plans for an entirely different blog this week, but today was a travel day and for those who travel, you never know what may happen, but whatever does, a story generally follows... For the most part, today was relatively uneventful.  I scored a reasonable parking spot, I flew through customs and security and even had time for a latte while waiting to board my plane to Newark, NJ.


The flight was a bit bumpy...one particularly bouncy period the pretzels that Air Canada so graciously gave me with my half filled glass of gingerale managed to wiggle their way out from their protective package onto my tray table.  Without a thought I popped it into my mouth.  YES you can shudder.  I did know I did as my senses came to back on line and the voice in my head started screaming "YOU DID NOT WIPE THE TRAY DOWN WITH YOUR DISINFECTANT WIPES!!!!!!!" I was instantly nauseous and I can assure you it had nothing to do with the bumpy ride.


Why did I feel nauseous you ask? Well..because back in May I read an article about a study conducted by a research team at the University of Auburn that was presented at the American Society for Microbiology (ASM) meeting that determined bacteria remain for up to a week on airplane cabin surfaces such as armrests, tray tables, seat pockets, window shades and toilet buttons.  In general, bacteria lived longest on the most porous surfaces.  MRSA lasted seven days on the cloth seat pocket, six days on the rubber armrest and leather seat, five days on the plastic window shade and tray table, and four days on the steel toilet handle while E. coli survived four days on the rubber armrest, three days on the plastic tray table, and two days on the steel toilet handle. As shown with other studies looking at transmission of organisms, the Auburn study confirmed that porous material prevents bacteria from spreading easily while bacteria on less porous materials such as tray tables were far more likely to transfer to human skin (and in my case, my mouth...).


I had purposely tried to block this study from my brain, I am well on track 6 months into the year to maintain my flight status....I already cringe when people cough and sniffle. I already beat the odds after boarding a plane for which SEVERAL (I confirmed with a steward) passengers had thrown up on a flight back from Orlando.  Admittedly, I chalked that one up to a flight of overly tired children who were depressed about leaving Mickey and Mini Mouse behind, but still, the odds for Norovirus were in my favour!


I do not know what possessed me to eat that pretzel off of the tray table.  But in preparing for the worst I've confirmed that according to The Mayo Clinic, E. coli O157:H7 infection generally begin three or four days after exposure although are known to occur as early as one day afterward and as long as week later. For those of you who do not know, symptoms can include diarrhea, abdominal cramping, abdominal pain or tenderness, and nausea and vomiting in some people.


Fingers crossed that the airplane was properly cleaned (and maybe sanitized?) between flights, if not and I don't post a blog next week you'll know why! 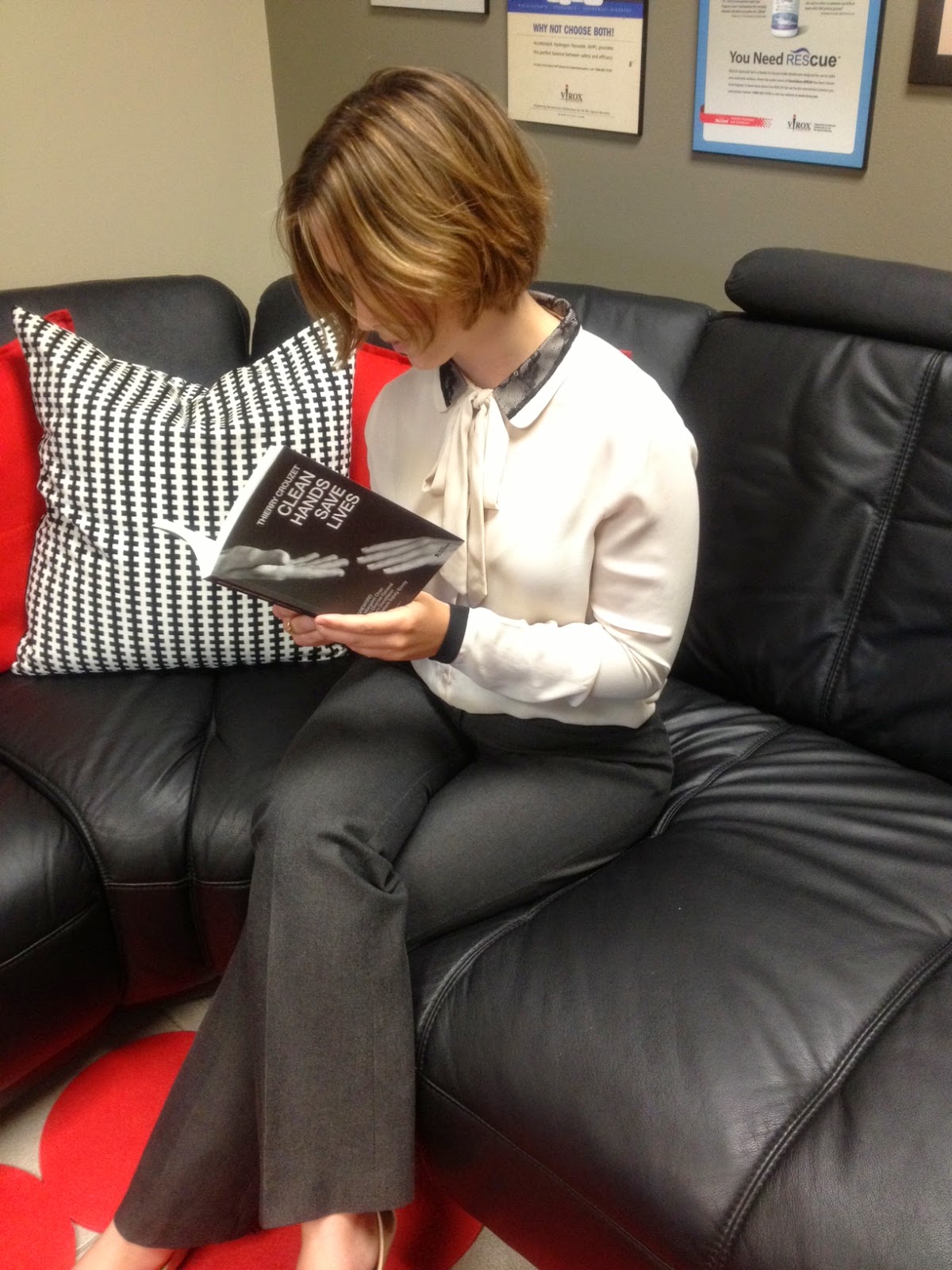 Summer is generally time for a little rest, relaxation and catching up on the book list we have compiled throughout the year.  As we have done for the last several years, during the summer months we review a couple books that we think are worth reading....or at least thinking about reading.  For those of you who attended APIC and waited patiently in line for a signed copy of this book by none other than Didier Pittet, you may already have it finished.  For those of you who did not attend APIC or who may have brought it home but have not yet cracked the spine, I hope this book review entices you to include it as one of your summer must reads!


Clean Hands Save Lives was written by Thierry Crouzet and explores the life work and role that Didier Pittet has played in advancing how hospitals think about hand hygiene in his attempt to follow his dream of saving lives through clean hands.  A storyteller, Crouzet takes us on a ride through Pittet's childhood as a boy scout, soccer and hockey team captain, and party organizer in medical school.  As the story unfolds we are introduced to a doctor who through observation of nursing and other staff going about their daily duties begins to understand how infections are transmitted.


Therein lies Pittet's breakthrough thought; "instead of striving to kill microbes in wounds, wouldn't it be more reasonable not to put them there in the first place?" As readers we are invited to follow the story of how Pittet carries people along with him in his question of "Clean Hands to Save Lives", first at his own hospital where he saw firsthand that improved hand hygiene compliance lead to decreases in HAI rates and his eventual success of carrying this message around the globe.


However, as Pittet learned, success is not simple or immediate.  As he came to learn, one should not impose their ideas on others, but educate and incite to gain their interest and agreement. Crouzet captures not only the successes, but balances the book by including the roadblocks that Pittet encountered along his journey and how Pittet looked to the learn from the father of hand hygiene, Ignaz Semmelweiss, so that he may avoid the perils and pitfalls Semmelweiss encountered in his attempt to bring hand hygiene main stream.


Pittet instead chose to offer alcohol solutions to hospital employees, educate on their benefits and provided supporting evidence to prove that they could be used successfully to improve infection rates. In fact, in the first three years of his program, consumption of alcohol hand products increased by 5-fold while HAIs were reduced by 50%!

Aside from kids with green boogers, there is not much that grosses me out.  Growing up on a farm you're introduced to the birds and the bees and all things in between at a very young age and if you're inquisitive like me, you are in the thick of it looking over a vet's shoulder or sweet talking the vet into letting you be the one to stick your hand or arm in all matter of places.  Without a doubt, I can handle blood, guts, vomit, poop and gore.


That was until, I read an article written by Bradbury et al that was published in AJIC titled "Potential bloodborne, pathogen exposure from occult mattress damage".   The reason for the brief report was a result of an occurrence where a patient after lying on a bed in a clean patient room noticed that the back of the bed pad and mattress were contaminated with a blood-like fluid.  The pressure from the patient's weight on the bed caused the blood-like fluid to seep from the mattress and stain the bed pad and sheets. #GROSS!


It was determined that the previous bed occupant had undergone a surgical procedure where it was possible they bled onto the mattress.  Examination of the mattress uncovered the fact that while the external cover was clean and appeared intact, the waterproof backing below the external cover had severely degraded and that there was a large stained area located in the mid-mattress region where a patient would normally lie.  As a result of this finding the facility then inspected 656 mattresses at the facility and identified 177 mattress (greater than 25%!!) with damage to the interior waterproof backing.  The result was replacement of the 177 offending mattresses, but the situation highlighted the fact that while the mattresses were cleaned and disinfected between patients, the facility did not have a process in place to inspect mattresses beyond the basic visual observation for external appearance.


This certainly highlights the need for a facility to have some sort of inspection process for mattresses that considers more than the external visual appearance. More importantly, it highlights the need to consider what type of materials we are choosing for mattress covers and the ability of these materials to withstand the frequency of cleaning and disinfection and general wear and tear within healthcare facilities.  As highlighted in an earlier blog "Mattresses...a soft place on which to lounge, nap or sleep" manufacturers who make the mattress material found on hospital beds recommend cleaning the mattress with soap and water, disinfecting the surface, and then rinsing.  For years Lee and I have recommended that hospital mattresses be rinsed post disinfection.  We weren't trying to create a make-work project. We weren't trying to complicate the cleaning and disinfection process for your housekeepers.  We were in fact actually trying to follow and comply with the instructions given by the mattress material manufactures to ensure that the disinfectants being used were used correctly.


I think Bradbury et al highlight the fact that mattresses need to be considered as a potential and very real reservoir for pathogens and given their delicate nature our infection prevention and control programs need to work closely with Environmental Services and Biomedical Engineering Departments to have a program in place that monitors the age of the mattress cover and the condition (both internally and externally) to ensure the next patient laying in the bed does not unwittingly get covered with someone's body fluids. I know I'll be hard pressed to "jump" on to a hospital bed the next time I head to the ER!